Welcome to IMPACT First Aid.  We are committed to improving people's confidence and ability to help other people in an emergency situation. We want to improve outcomes from out-of-hospital cardiac arrests. This can only be done by improving bystander CPR rates and availability of community public access defibrillators (CPADs).

Jon puts his experience into practice whilst on a plane... 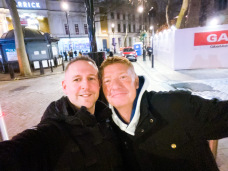 Specialist Paramedic (Critical Care) with Yorkshire Ambulance Service NHS Trust, Jon Thordarson emphasised the importance of learning CPR after he was reunited with a stranger whose life he saved while travelling home from a holiday in The Canary Islands.

Jon, who is based in East Yorkshire's Critical Care Team, was on the plane waiting for take-off when a fellow passenger, Terry Porter, collapsed in cardiac arrest on the same row.

With no other medics on the plane, Jon started CPR and gave six shocks with the plane’s defibrillator before the 50-year-old started showing signs of life. Terry was well enough to return to England six days later.

Jon said: “I’ve spent the last 12 years teaching CPR and First Aid. I have been volunteering as part of Restart a Heart Day every year since it started in 2014, teaching people in schools how to do CPR and what to do if someone has a cardiac arrest. Despite attending and managing out-of-hospital cardiac arrests regularly for the last 5 years on a Specialist Cardiac Arrest Resource for Yorkshire Ambulance Service, this is the first time having to manage one off duty... and in a different country!”

Jon travelled to London and was reunited with Terry, who said: “It’s really difficult to sum up the experience. I am of course forever grateful to Jon for being there and not only giving me a second chance at life but also restoring my faith in people. There are indeed angels and heroes in this world. I wouldn’t be here today if he hadn’t stepped in and taken control. I now have first-hand experience of how CPR knowledge and expertise can save lives.”

The "Chain of Survival" - what needs to happen for someone to survive a cardiac arrest!